From a book-length poem to a multi-media experimental opera to its current incarnation as a CD, Darkling gives a haunting portrayal of the emotions, terrors, and incalculable losses incurred during the period between the two World Wars and the Holocaust. Commissioned by American Opera Projects, DARKLING is based on Anna Rabinowitz’s Darkling: A Poem (Tupelo Press, 2001) set to original music by post- classical composer Stefan Weisman. Featuring four singers (soprano / mezzo / tenor / baritone), a string quartet and 16 spoken-word artists, DARKLING movingly evokes the memory of the Holocaust as well as the human cost of cataclysmic events through a fusion of avant-garde gestures, opera, cutting-edge technology and poignant language.

Listen to an Aria from Darkling Opera

They Will Not Ask

Listen to Anna Rabinowitz on Darkling

“Originally a book-length poem, then a multimedia theatre piece, Anna Rabinowitz’s tale of a Holocaust survivor rummaging through the scattered memorabilia of her murdered family spins a powerful, unsettled web, the often allusive nature of the story reflecting significant gaps in her own family history in the wake of Poland’s Nazi occupation. Where Rabinowitz originally found a structural solution in an acrostic poem inspired by Thomas Hardy’s The Darkling Thrush, composer Stefan Weisman mirrors that approach in his tight, emotionally mercurial score.”

“…textured with vocal and string quartet sequences that smolder or gleam, Darkling is a memory quest and testimonial to broken knowledge…Voices hover and parry, with Weisman’s arias providing both tension and release…Darkling is deeply mindful work.”

From The Juilliard Journal Online:

“Darkling CD offers intriguing take on the problem of memory”

American Opera Projects (AOP) explores the outer edges of the operatic form with Darkling, an experimental opera- theatre work. Spanning the decades from the 1930’s to the post-World War period, Darkling is a remarkable story of love, loss, calamity and hope. Past and present blur, characters are swept along by the great forces of history, and lives are bowed and buffeted in this uniquely moving and captivating work. "Brave and sensitive" (The New York Times ), Darkling uses opera, avant-garde theatre, vaudeville and cutting edge technology to create “an unlikely collaboration of Wagner, Sally Bowles and Steven Spielberg" (Time Out / New York ). This dramatic tour-de-force

views history not from a grand geo-political perspective but from the insightful, intimate outlook of a poet whose ordinary Polish-Jewish family is unexpectedly overtaken by the extraordinary events of the Holocaust.

Darkling assembles narratives of the Holocaust not through the convention of narrative details but through the turbulence of multiple voices in the act of finding themselves. The production recasts opera in a contemporary form by overlaying poetry with live music, interweaving the drama with a landscape of projected films and images, collages of spoken text and pre-recorded soundscapes.

In 2006, American Opera Projects presented the world premiere of Darkling, which ran off-Broadway for three weeks to wide critical acclaim. Subsequently, Darkling toured in a concert version to Berlin and Poland and to the Center City Opera as part of the Philly Fringe Festival in 2008. Excerpts have been performed in many venues, including New York City Opera’s Vox series at NYU’s Skirball Center and the Works and Process Series at the Guggenheim Museum. Darkling was created for four singers (soprano / mezzo / tenor / baritone), seven actors, and string quartet. The touring version of Darkling reduces the number of actors to three and is adaptable to multiple venues.

“Dana Gioia, Anne Carson, and Glyn Maxwell have all written librettos of late. None of these works, however, approach the ambition of American Opera Projects’ recent adaptation of Anna Rabinowitz’s 2001 volume, Darkling.”

From The New York Times:

From Night After Night:

“Let Darkling serve as a reminder that opera can also be what and where it is found. This is a profound, provocative piece of musical theater—one that I hope will occasion a great many opera lovers to stray from habitual paths. As specific as the context of Darkling may be, its message is ultimately universal…stretches the very definition of opera.”

“…an intensely complicated work of art. Bravo to AOP for supporting such controversial and ultimately important work, and to the creative minds that fitted it all together in a thought-provoking way.”

“In her latest volume of poetry, Present Tense, Anna Rabinowitz faces squarely the matter of temporal alienation. Even the title deserves our pause. At first glance, it looks like a simple reference to simple grammar. We often write and think and speak in present tense. It is the mode of everyday commerce. But we readily see the double entendre, accentuated by the fact that the cover’s text is distorted: the present is tense.”

From Time Out (Theater section):

More on Darkling from AOP

The Wanton Sublime monodrama premiered in London in August, 2015
as part of the Grimeborn Festival at the Arcola Theatre

Presented by Inside Intelligence as part of Grimeborn Festival

Performances by Mezzo-soprano Hai-Ting Chinn and The Orpheus Sinfonia

“What does it mean to be chosen?” The Wanton Sublime explores the human and mythic aspects of the Virgin Mary. In this one-act monodrama for mezzo-soprano and amplified chamber ensemble, Mary struggles to retain her flesh and blood identity in the face of external forces intent on symbolizing her as the ideal woman.

Rabinowitz rejects the notion of the Virgin Mary as a representation of the eternal feminine and depicts instead a strong young woman who questions, challenges and even defies the God who has slated her to be the mother of Christ.

It's a stimulating thesis that owes much to the existential feminism of Simone de Beauvoir (who warned that women's identity had been constructed by men, and therefore urged them to embrace their own freedom) and it's expounded with fierce economy across 30 absorbing minutes.

O'Regan colours the drama with pre-recorded vocal episodes and long melodic lines broken by punchy chords, and it never fails to grip. What a thrilling composer he is; this is vital, compelling music. As for Chinn, the singer who created the role at its American premiere, her dramatic engagement is as striking. Robert Shaw's commendably simple staging presents her as a power-dressed young professional who changes midway through into simpler clothes that better assert her individuality. It's a subtle transition, and beautifully judged.

Praise for The Wanton Sublime

“an unusual, fascinating and touching musical portrait of someone who, to this day, has fundamentally remained a somewhat mysterious character as a historical figure and as a woman.”

From I Care If You Listen:

“[a] beautiful and effective score...skillfully executed. [Mezzo-soprano Hai-Ting] Chinn’s radiating presence told a story of its own that certainly aligned with Rabinowitz’s fluidic words.”

From Seen and Heard International:

“…not only grippingly entertaining but proved that the small opera is gaining ground as a viable and truly accessible genre in itself....Hai-Ting Chinn offered a fervid, piercing interpretation through dialogue that encapsulated the struggle over a woman’s forced identity in a male-driven society.”

“Some passages were so spare and atonal that they could’ve been Schoenberg’s. Dramatically, it couldn’t have been more effective in terms of telegraphing to the audience that all concerned parties were on new ground.”

Listen to an Excerpt from The Wanton Sublime 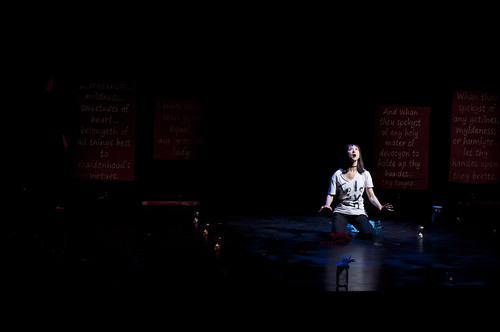 ★★★★ “An invigorating and rewarding experience of rare quality” —Daily Telegraph

★★★★ “Go and catch this show NOW.” – “A strikingly immersive experience” —The Stage

★★★★ The Times, Time Out, WhatsOnStage, The Stage

“Robert Shaw’s production is a little gem.”  —The Stage

Staged reading of opera and panel discussion with artists

Concert reading of opera excerpts and panel discussion with artists

Words on the Street

Words on the Street, a hybrid music-theater event that wrestles with power, apathy, and excess, premiered at the Baruch Performing Arts Center in NYC in 2018. Sometimes darkly comedic, it casts a merciless light on the Seven Deadly Sins, and their interventions and influences in human life.

Words on the Street is a “what-done-it?” as well as a mystery bordering on rumination. An infant is abducted and the Sins relentlessly play out their power struggles while pandemonium reigns in a dystopian world teeming with hearsay and falsehood, plagued by threat and insecurity.

Praise for Words on the Street

“Matt Marks [composer] saw his work on Words on the Street as 'a gradual act of opening the sonic, dramatic, and visual possibilities of Anna's poems to be shared with our eventual audiences', who...'weren't bred to be [music theatre hybrid] aficionados'...Words on the Street combines this musical point of access with a plot...entrenched in metaphor...a deliberate combination of unlikely forms meant to reflect on disaster in a time of excess and pleasure...treads an...inattentive earth in search of the observant versus the didactic.”

Interview About Words on the Street with Composer Mary Kouyoumdjian

From I Care if You Listen